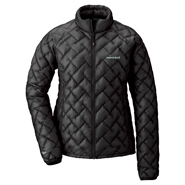 On my Calendar Year Triple Crown I received a sample Plasma 1000 Jacket to try out. Initially I was uncertain if it would be adequate as the temperatures continued to grow colder, but I was pleasantly surprised by it’s overall performance.

Both the Plasma 1000 and the Mirage Parka (the two down jackets I had to test out) are incredibly light and warm. The Mirage weighs in at just under 14 oz, however the Plasma 1000 is a mere 8.4! The 1000 fill power in the Plasma 1000 makes for a shockingly light jacket for the warmth. I found the Plasma to be as warm as the heavier Mirage, more compact, and more fitted. This made it an excellent choice for overnights as well as subsequent day trips I’ve been on.

The hood is adjustable as is the waist, which is great for windy days when you need to seal in as much warmth as possible. While considered a “sweater weight warmth”, this parka is more than adequate for any long distance 3-season trekker and most cold weather day trips. Since it compacts small and lofts quickly, it’s an ideal insulating layer to travel with.